Ringkøbing-Skjern Housing Association has just completed the first stage of the Fjord View housing project in the relatively newly established Nature District, and Nilan has delivered ventilation systems to all the houses. The passive houses are so energy efficient that it is unnecessary to connect them up to the district heating network.

On Friday 1st October, 26 tenants received the keys to the first social housing properties situated in the Nature District at the northern end of Ringkøbing Fjord. From their windows the residents can enjoy the view of the fjord, but there is another reason for the windows facing south. The buildings have been designed so they can be heated with minimal energy consumption, for instance by allowing as much sunlight as possible into the buildings during the day.

This is certainly not conventional social housing. According to Bo Lodbjerg, Chairman of Ringkøbing-Skjern Housing Association, the dwellings have been built in line with the highly ambitious passive house concept. This means that the houses can be heated with limited energy consumption. At the same time, the residents can enjoy sunlight in their homes as well as a pleasant indoor climate with a constant supply of fresh air.

The new dwellings in Fjord View have been designed so the energy required for heating is only approximately one tenth of that of regular houses of the same size. While sunlight is being utilised to the maximum from the south, there is minimal heat loss from the very compact houses, which have neither chimneys nor heat pipes.

Floors, outer walls and roofs have been constructed to be as tight as possible with no thermal bridging. They are also better insulated than standard houses. A ventilation unit, which ensures a constant supply of fresh air, distributes the heating in the home while ensuring air circulation. 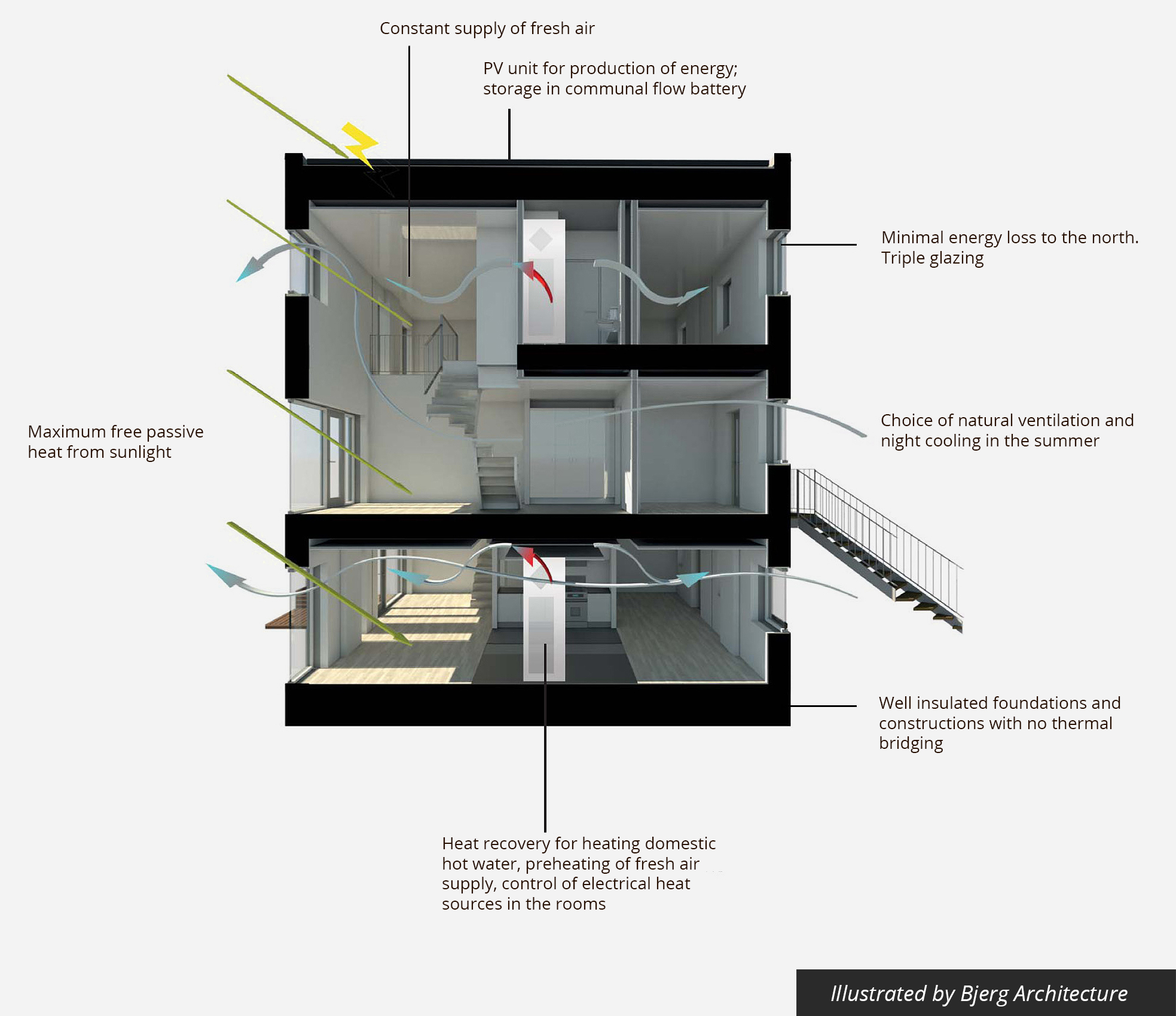 Radiators are almost redundant
Due to the passive house design, it has been unnecessary to connect up the dwellings to the district heating system. Bjerg Architecture, a company specialising in the construction of passive houses and environmentally friendly buildings, has designed the new, extremely energy efficient houses.

The indoor temperature can usually be kept at a comfortable level solely with the heat from sunlight, lighting, electrical appliances and the people in the building. However, in line with building regulations, a small radiator has been installed in each room. Søren Riis Dietz, who is an architect and partner in Bjerg Architecture as well as a certified designer of passive houses, explains that the radiators are really only needed in the rooms facing north, and then only during winter when it is overcast or very cold for long periods of time.

The energy efficiency of the houses is predominantly the result of clever design and construction. In addition to this, however, solar cells have been installed on the roofs so the houses have their own energy production and become as sustainable as possible.

Every house has a so-called compact unit consisting of a ventilation system, a heat exchanger and a heat pump all in one. The unit produces energy mainly for hot water. All the compact units are connected up to one large energy efficient battery in which excess energy from the solar cells gets stored. The system is set up to be as energy efficient as possible. It uses energy directly from the solar cells and, when this is insufficient, it draws on excess energy stored in the battery or energy from windmills situated offsite. It is usually cheaper to use the energy produced by the solar cells, but during periods of very windy weather, the price of wind power may drop so much that the system automatically chooses to use energy from the electrical grid. The intelligent control system therefore always uses the energy source that is most environmentally sustainable and cheapest for the residents.

Søren Riis Dietz explains that during spring, summer and autumn, the solar cells generally produce enough green energy during the day to cover the energy requirements of the houses.

The houses are an attempt to contribute towards the green transition as much as possible. In this fashion, the dwellings in Ringkøbing are an example of innovative social housing, and I actually believe it to be the most energy efficient building project in Denmark right now.

The passive houses in the Nature District